“Those Things Are So Cool?” 19th Century pine obelisks 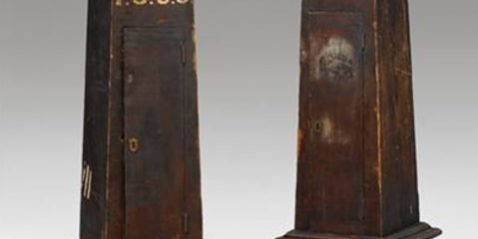 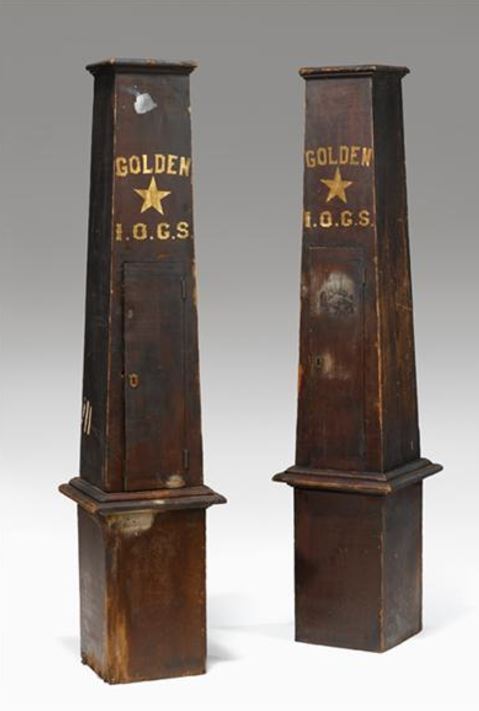 Back in 2008, I purchased a pair of 19th Century pine obelisks from an auction house in Philadelphia.  I spent the beginning of my career at Freeman’s Auction house in Philadelphia.  It is America’s oldest auction house.  The obelisks unique quality drew me to them.  I had never seen anything like these.  The painted star and the initials on the front, “I.O.G.S.” intrigued me the most.  The catalogue description stated they were from the fraternal order, “International Order of the Golden Star”.  Even though the catalog was developed by some very smart people, i could never find information about the International Order of the Golden Star.

“what are those things?”

The obelisks are always a conversation starter in my home.  The number one question I get asked when people come to my house is, “what are those things?” These two unique pieces of furniture have been a little bit of a riddle ever since I bought them.

They are of rectangular tapering form, decorated on two sides with gilt star and inscribed ‘Golden I.O.G.S.’  They have a single prospect door and one fitted with an interior mirror and on the very top of each obelisk is a hole.  No one ever identified as exact use of these holes.  So, my guess is that maybe a star or some other ornamentation adorned the tops, but who knows!!

After toiling on the internet, I came up with nothing in reference to the ‘International Order of the Golden Star’. However, I did find a website listing all fraternal orders and an 1881 listing popped up, “Golden Star Fraternity”.  Is this my Order?  After looking around some more, I found this Order abbreviates their chapter as “GSF”. So, alas, I was back to square one, but i persevered.

After a little more digging, I found “The Independent Order of the Good Samaritans and Daughters of Samaria”.  Seems like I found what I was looking for, this could certainly be abbreviated, “I.O.G.S.”

The Independent Order of Good Samaritans and Daughters

‘The Independent Order of Good Samaritans and Daughters of Samaria was established in New York City in 1847 as a temperance group and a beneficial society. Although founded by white men and women, within a few years African Americans began joining the order, for the most part segregated into separate lodges. Whites began withdrawing from the order around the time of the Civil War, and before long it was an exclusively African American organization. It was probably one of the largest African American fraternal groups.

The motto of the Order of Good Samaritans and Daughters of Samaria was, “Love, Purity, and Truth.” Its objects included promoting temperance reform, securing charity for the unfortunate, and burying deceased members of the order. Membership was open to women between the ages of 15 and 50, and men between 18 and 50. Abstinence from “intoxicating drinks” was required; members found violating this requirement on one occasion would be suspended, and upon a second violation be expelled. Members could also be expelled for betraying secrets of the order.

A Philadelphia branch, Golden Star Lodge, No. 4, of the Independent Order of Good Samaritans and Daughters of Samaria, was organized November 17, 1880 under the jurisdiction of the Right Worthy District Grand Lodge, No. 2, of Pennsylvania and Delaware. That year, the national order counted around 20,000 members in up to 375 lodges located across the United States, Canada, and the Caribbean.” (Courtesy of http://dla.library.upenn.edu)

In conclusion, I am now convinced my obelisks are from Philadelphia Branch of Independent Order of Good Samaritans and Daughters of Samaria. 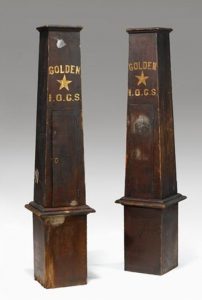